The Middle Path in Macleodganj 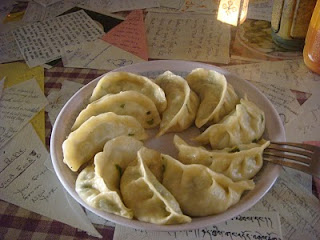 
I found this curiously brazen list of priorities scribbled on a napkin and tucked under a glass table top at Momo Cafe. I was in Macleodganj, a small town nestled amid the hills in north India, which had been home to the exiled Dalai Lama, for the last fifty years. I had come expecting to find a solemn, spiritual kind of place, exuding an old world, simple charm.

I wasn’t prepared for the rampant, colourful, commercial tourist town that it turned out to be. The narrow roads leading out from the tiny town square were filled with souvenir stores hawking everything from singing bowls to ‘100% Tibetan silver jewellery’. Outside the temple, near the town square, the fragrance of incense mingled with the aroma of steamed momos, or dumplings, coming from the tiny stalls which ringed the temple. On every available wall space, there were posters promoting courses in Buddhism, massage techniques, Reiki, vegetarian cooking or even on ‘how to find yourself’. You could sample authentic cuisine from Italian cafes and German bakeries. Or even try some fusion fare such as Chocolate Momos or Momo Pizza. 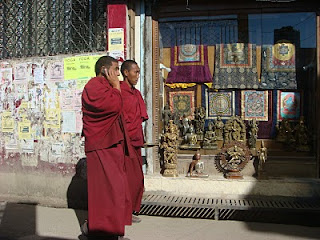 But Macleodganj had its austere side too. Away from the clamorous town centre and higher up in the hills, was Dhamma Sikhara, a Vipassana meditation centre. Vipassana is one of the oldest meditation techniques, used by the Buddha himself, a process of self transformation through self-observation. It’s not for the faint of heart. A Vipassana course consists of 10 days of meditation in absolute silence, avoiding even eye contact with others. The abject stillness at Dhamma Sikhara provided a stunning contrast to the raucous materialism of the town just a kilometre away. Each felt extreme and uneasy.

And then I met Norphal, whose name means ‘jewels’. He had a small trinket store on Bazaar Road and sold Tibetan silver jewellery which he admitted was ‘bought from Bangkok’. Norphal had been born in Macleodganj, and had only seen Tibet in pictures. His grandmother and father had fled from Tibet and walked for 29 days in order to reach India. His grandfather had stayed behind, and they never heard from him again. Norphal was a practising Buddhist, but he said he sometimes closed his shop early and went to St. John’s Church, a 19th century looming Gothic structure, just to experience ‘peace of mind’.

Norphal invited me to his home one morning to meet his grandmother. I had been asking him questions about Tibet and what it meant to be a refugee, when he invited me over. We walked on Tipa Road, past Thangka artists and internet cafes, Kashmiri shawl sellers and women with momo carts. Climbing a small dirt road, we reached a cluster of tiny dilapidated houses. The soulful chant ‘Om Mani Padme Hum’ was playing on a tinny music system in one of the houses. A few hens pecked at the dirt in the garbage-strewn yard. 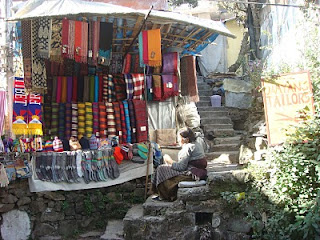 Norphal’s grandmother was sitting in one corner of an almost bare room, and rocking herself. Her eyes were buried deep in the generous creases on her face, and she stared at me in an unabashed, frank manner. When she stood up to go to the kitchen, she was almost bent double. She came back with a bowl of tsampha or porridge, and salty butter tea. Until then, the only Tibetan fare I’d only sampled were momos and a vegetable broth called thukpa, and they were easy on the palate. The salty tea took a bit of getting used to.

Norphal’s grandmother sat close and watched as I ate. Sometimes she spoke in Tibetan and Norphal translated. He told me of her arduous trek to India, escaping Chinese soldiers and losing family members to exhaustion and starvation. She spoke about meeting the Dalai Lama, and her belief that he would lead them all back to their homeland. If not in her lifetime, then at least in Norphal’s. They had a rapid exchange in Tibetan after she said this. Perhaps, Norphal didn’t approve of her pessimism.

Norphal told me he loved India, and felt Indian most of the times, except when he had to renew his Registration Certificate every year. That’s when he felt like a homeless refugee. “I always ask my grandmother to talk about our home in Tibet, the people the land. And then I feel less... less lost.”

I asked him what his grandmother missed most about the home they’d left behind. She said something and pointed to my face. Norphal turned to look at me, and then both burst out laughing. I asked what they found so funny, and both laughed harder. His grandmother fell on the floor, cackling. The somber mood in the room as we talked about a lost land had vanished. And I couldn’t wait to find out how I had contributed to the merriment.

“She says she misses her cows the most,” said Norphal. “She says, they used to have a ring in their nose, just like you.”

I looked at her as she continued heaving with laughter. Her eyes had slid into one of the crevices on her face, and her near toothless gums quivered with delight. I touched the thin silver hoop on my nose which had caused so much nostalgic merriment. And I began to feel that between there was more to Macleodganj than the tourists and the Dalai Lama.
Signed, Leela A at 1:14 pm

What a wonderful travel story. I guess small things like these which seems so normal to us but strange and in your case, funny, are the highlight of travels. Enjoyed reading it.

Thank you Sid. Making a 'connection' with the old woman helped me connect with the place better. Am glad you liked the piece.