Fresh from the tidal wave that was the Emirates Airlines International Festival of Literature, I’ve been swept away by another surge, this time to a world not as familiar as books and writing. But it’s a world that has held a steady fascination for me, and more so in the last two months, when I was writing a commissioned article for a leading publication in India.

I’ve met the most knowledgeable, passionate and visionary artists, curators, gallery owners and art lovers, who’ve not only added to my understanding but have also kindled a passion to further explore the fascinating world of art.

At the Art Dubai press preview today, there were over two hundred members of the Press from over the world, and after the usual round of introductions by John Martin and Savita Apte, directors of the art fair, we were led into the area where the three winners of the prestigious (not to mention, lucrative) Abraaj Capital Prize had displayed their work. Each of them had a distinctive medium of expression.

(Apologies in advance for the less-than-brilliant photography. They don’t do enough justice to the art. Moreover it is a bit challenging to balance a camera and an armful of magazines, programmes and other literature.)

Hala Elkoussy’s was a mural titled, ‘Myths and Legends’ a collage of contemporary myths and legends in modern-day Cairo. 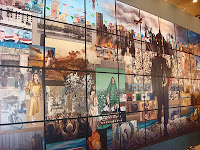 Marwan Sahramani's Feast of the Damned covered every wall of the room, including the ceiling. It was, as one visitor described it, ‘a darker rendition of the Sistine Chapel’. The artist explained that it was his dialogue with painters that he admired like Rubens and Michaelangelo. 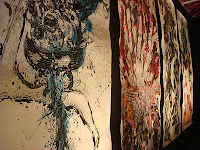 Kadir Attia, had a fashioned a rough replica of the Dome of the Rock in Jerusalem using an ordinary bolt, and projected it on a wide screen so that it was magnified to almost a thousand times its size. He said it was a commentary on several levels - social, religious, metaphysical and so on. He had a few profound comments to make like, "The smaller you are, the bigger you are." And "It's not what you see, but what happens in between." The installation was accompanied by eerie sound of wind that he'd recorded in a ravine. (p.s to get an idea of scale, the light on the right is the bolt/dome which was being projected.) 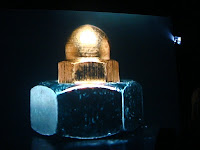 Post-lunch, the doors to the galleries were opened, and I have to say, it was nothing short of a visual feast. There are 72 galleries, and it didn't make sense to take it all in at one go. I definitely plan to go again with more time on hand, and with more sensible shoes.

A quick round up of some of the work that caught my eye: 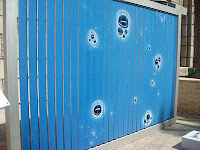 I loved the title of this installation - Not Everything Is Made In China. 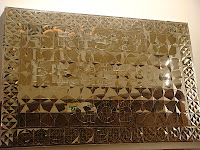 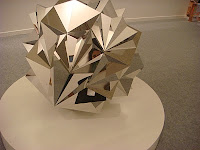 I found a little bit of myself in this piece ;) 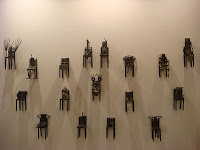 The Athr Gallery from Saudi Arabia had some striking work. The Metamorphosis of a Chair series by Saddek Wasil was particularly evocative. 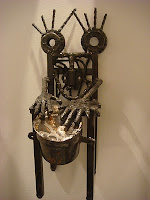 My favourite in the series. Of all the chairs, it seemed the least 'angsty' until the curator shared that it connoted escapism. Oh well. 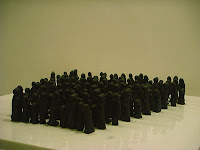 Pious women by Noha Al-Sharif. Also from the Athr Gallery. 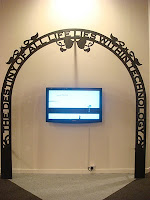 The entrance to a cemetary, perhaps? 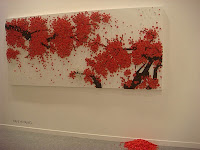 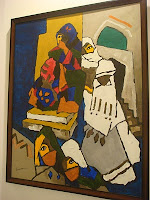 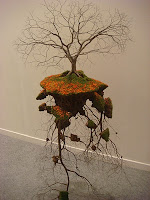 Stunning work by Jorge Mayet, a Cuban artist based in Spain. A very visual sense of being uprooted. 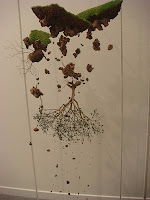 And another by the same artist 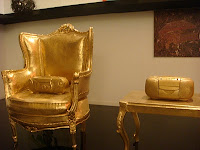 You can't escape the bling in Dubai
If there was one artist's work that stood out in my frenzied dash, it would have to be James Clar, a Dubai-based American artist over at the Traffic Gallery. Wild, imaginative and a touch of dark humour 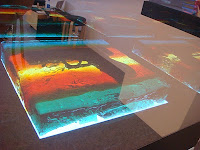 Titled Pop Culture, it's a gun that's been fired once and then cast in candy! A commentary on how violence is glorified in the media. 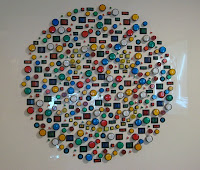 You know if you're a true 'acid house junkie' if you can see the yellow smiley face amid these switches and dials. I couldn't. It's only jazz and blues for me :-/ 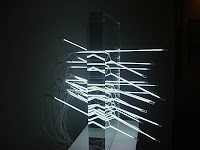 From a series called Moment Defined by a Point and Line, it's a trace of the bullets that killed
Amadou Diallo, a commentary on murder and media portrayal of it. 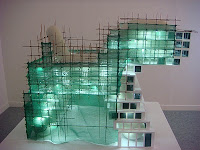 You cannot be living in Dubai for 5 years and not instantly notice that it represents a 'building under construction'. The second of a 3-series installation, it's supposedly a stalled project because of funding issues. Hah.
I'd just finished the tour and was thinking longingly of a hot water bath for my feet, when I almost got trampled on by a horde of photographers. "Looks like a dignitary has arrived," my German friend remarked. And then His Highness, Sheikh Mohammed Bin Rashid Al Maktoum, came around the corner. Not a bad ending to the afternoon, I say. 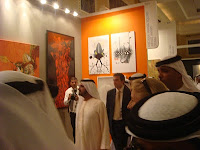 Loved your reporting on art and literature as much as everything else on your blog. Keep writing, and a lot more regularly :)

Kaevan Thank you for making my day.