My head’s buzzing from the literary overload. And there’s still another day to go. But I’m hardly complaining. The four sessions I attended on Day 3 were brilliant and supremely entertaining . My perception of authors as taciturn, unsocial sorts has changed quite considerably. They’re full of anecdotes and sizzling one liners, and the hour long session passes by way too quickly for everyone’s liking. 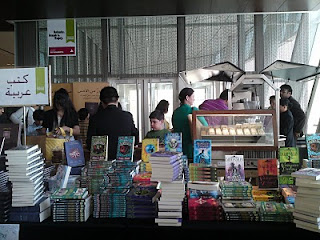 * The session was about him as a travel writer. He shared about his ‘unusually cloistered’ and stable childhood in Edinburgh, and the subsequent explosive effect that India had on him when he visited the country at age 18. “My life can be neatly divided into 2, before India and after,” he said.

* Speaking of his latest book, Nine Lives, he said, “Indians feel that Western authors only want to write about 3 things – poverty, maharajas and sadhus. Considering Nine Lives is about the latter, I was afraid it wouldn’t do too well.” But it’s turned out to be the highest selling non-fiction book of all time, selling 50,000 copies in India alone. (I had to buy my copy after I heard the excerpts that he read out.)

* About travel writing: “I make the effort not to write about the same book twice. I thought I’d covered all grounds with my previous travel books. And I wasn’t sure I was going to write another travel book. But when I found a new form for Nine Lives, I decided to write it. It’s a book on modern India and about how traditional sacred practises find no place in this modern milieu.”

* When asked about the changes he saw in India today as compared to when he first arrived almost 20 years ago, he said, “India today is unrecognisable from my early days here. There are parts which have remained unchanged. For instance, you’ll still find old army generals walking around Lodhi Gardens in tweed coats. But the country has moved on.”

I wasn’t quite sure what the session was going to be about, but I was keen to listen to the thoughts and opinions of writers from the Arab world. All three were best selling writers – from Sudan, Egypt and Palestine respectively - and interestingly they didn’t write solely in Arabic. Ahda’s novel Map of Love had in fact been shortlisted for the Booker Prize in 1999,  It was an intriguing glimpse into words like identity and conflict and what it meant to be Muslim in today’s world.

* When asked by Kate Mosse, the moderator, if they saw their role as being storytellers or representatives of their country, who had to set the record straight, they had interesting responses:
Leila: “My novels are my truth. But having said that, I found that I didn’t recognise the Islam that was being portrayed in the media. I wanted to write back but couldn’t. I was a trained statistician. I started writing fiction as a way of finding release for my feelings. And that’s how I found my voice.”
Ahdaf: “I started out with innocence. I just wanted to be a story teller. I didn’t think of the politics of reception or duties of representation. Fiction shouldn’t have to bear this burden. So for a while, I stopped writing fiction and concentrated on political commentary.”
Raja: “My experience in the West Bank was not as extreme as some of the others who lived there. So I would question myself, ‘Am I distorting reality by writing about my experience that’s not so extreme?’”

* About whether their audience is the West or people from the Arab world, Leila shared, “Since I get published in the West, my readers are Western people. But I find the type of reader of my book has changed since I’ve begun writing. So many of my readers are from Nigeria or Pakistan or other parts of Africa, so I don’t feel the need to explain everything in my books.

* Raja distinguished between getting printed and published. “While a lot of books by Palestinian authors were getting printed, it’s not the same as getting published. The book isn’t well designed or well translated. And so it suffers.”

* Ahda said that translation was an art which few could master. “Just knowing English and Arabic
doesn’t mean you can become a translator. You have to understand the background, the rhythm of speech. Otherwise the translation is a travesty.

* Leila mentioned that she couldn’t have been a writer if she was in Sudan. “My family and friends don’t yet understand what I do. They keep asking me to get a real job.” But she said that even though she only wrote in English, it was like she wasn’t just translating her native language, but also the culture. “There are words in Arabic that just don’t work in English, like pious, for which the thesaurus throws up ‘bigot’. I’ve to find a language in English to express my Arabic self.”

* All three agreed that there was an extraordinary sense of physical place in their writing whether it was historical in the case of Ahda, or a fragmented land in the case of Raja. “I cannot start without rooting people in a place,” shared Ahda, “I’m attached to places. When I’m unhappy or dislocated, I start imagining a place where I was happy.”

Marjane in person is just like the Marjane in her best-selling book, Persepolis – feisty, outspoken and funny. Even though her life is well drawn out throughout the book, and by the end of it, one feels that one knows her intimately, it’s still a wonderful experience seeing and hearing her on the stage. 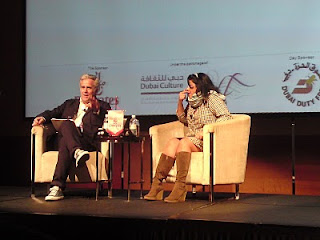 * She wrote Persepolis six years after she left Iran for the second and final time. “It was good that I wrote it after an interval because by then my anger against the regime had cooled down a bit, and I could write more objectively. Otherwise I would have used the same logic as the people I was angry with.”

* About the use of humour in her books, she felt that it was the highest form of entertainment. She once had a woman come up to her in America and say to her, “I read your book and now, I’m not afraid of the Axis of Evil, because I know you'll do laugh.”

* Marjane shared that she found it odd that she often had to justify why she drew her first book. “No one asks a filmmaker why they make a film instead of singing a song, but I always have to say why I draw. Drawing is the most universal language. I like to draw and I like to write. Why do I have to choose between the two and not do both instead?” 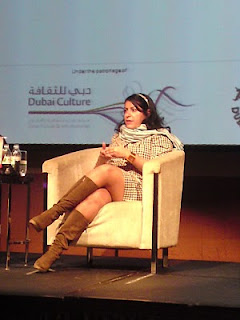 * She shared her experience of doing the film which she loathed for the most part because it involved working with so many people. “I’m used to working in solitude, and suddenly I now have 100 people waiting on my every move. I hated it.” But she mentioned enjoying the last few months. And of course, winning the Cannes Jury Prize for it.

* About her experience of writing children’s books, she lamented that publishers viewed children as pure, innocent sorts and wanted stories that portrayed happy rabbits. “Children are mean and horrible human beings,” she said quite unabashedly.

* The highlight of the session was at the end when she shared her experience of giving a talk at West Point Academy, which she described as a place where poor American families sent their children so that they could get a free education. “The American soldier is just a boy with no money,” she said.

A voice from the crowd yelled, “How would you know? I went to West Point. The senators' sons study there. Joe Biden’s son is there.” It seemed that Marjane lost her verve for a fraction, but she recovered enough to retort that the American policies were nothing to be proud of. “If you want our oil, our wealth, come and take it. But you cannot say you are making a war to fight terrorism. That’s like putting a person with fever in alcohol. The fever goes down, but the infection remains.” The crowd cheered her but the air hung thick in the room.

I was there. Her initial point was about West Point kids and how they're from poor/uneducated families who have an incorrect impression of the Middle East.

This led to the gentleman in the back interrupting her with "How would you know?" etc. It was slightly startling and it silenced the entire hall.

He said he doesn't think Middle Easterners are terrorists, "the problem is the Islamic people." Followed by boos and angry chatter.
Nice comment to make in the UAE.

Ivy Thanks for filling in the missing bits. It was an intemperate comment for sure, but it added a bit of excitement. Apparently, the gentleman attempted to muscle his way while she was signing books and had to be escorted out. Much ado.

Btw, nice blog. I will be back to read your archives.

Thanks that's encouraging :)
I wish I had the gall to say something to him aside after the hour was up. How much constructive debate can you have with someone who has such convictions? I'm so curious to try with people like him but it's often so frustrating. Glad you enjoyed the lit festival! It was awesome.

Ivy: People with rigid notions are best left alone, I've discovered. They don't want to be convinced that there's another point of view, merely to reinforce their own. No point wasting energy, I say.

As for the lit fest, only wish the tickets were less steep so I could have enjoyed more. :)