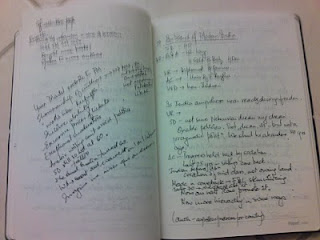 At every session I’ve attended the authors are inevitably asked why they write. But if someone were to ask me why I’ve been writing page after page in my notebook at each session I’ve attended, I’d say, ‘to hang on to every word’. They’ve been that interesting, entertaining and informative. The sessions I attended today were wonderfully diverse, from food writing to music, and travel adventures to India lauding/bashing. A snapshot of them:

* The food writers’ panel was a kedgeree of sorts with a Palestinian-Canadian (Suzanne Husseini), an Indian-Brit (Anjum Anand) and a British-Arab (Mike Harrison). While Suzanne and Anjum had written books about their native cuisines, Mike had written a Yemeni cookbook and another which spanned the Maghreb countries. One interesting point made – culture is handed down and preserved through food. Hmm, never thought I was going against my Mangalorean seafood-loving culture by turning my nose up at fish curry!

* Travel writing might seem like a dream profession for most wannabe writers and travellers (including yours truly). But a session with Tim Butcher can disabuse you of any romantic notions about the same. To be fair, his trips have been fairly gruelling - a journey across Congo, tracing the route taken by the famous Henry Morton Stanley over 100 years ago. And a 400 km trek on foot through Sierra Leone, a journey done by Graham Greene in 1935.

It was an enlightening talk not just about the hardships he underwent to write his book Blood River, but also about the Congo itself. “1500 people die every single day in the Congo. And yet it doesn’t make world news,” he said. There were other more gruesome facts accompanied by pictures. Like unburied bodies from conflicts where no one could recollect the aggressors since there were so many groups of them. Or the bizarre choice that people taken by the rebels in Sierra Leone were offered – half sleeve or full sleeve – meaning the extent to which their arm would be chopped off.
“Congo is a country that’s undeveloping,” shared Butcher, “Like most of Africa there is a will to survive, but not thrive.”

For him, travel writing wasn’t just about the place, but about the journey of the place. So when asked about his next adventure, he shared - a camel ride from Jerusalem to Baghdad! And his advice to adventurous travel writers – travel light, take local advice, have a satellite phone and keep getting lucky. 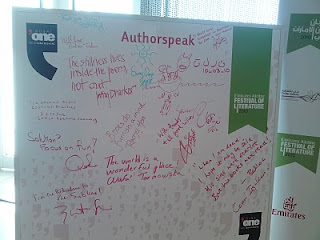 * You can usually tell how well respected a writer is when other literary heavyweights attend his or her session. Raja Shehadeh’s talk was graced by most of the well known Arabic writers. A much respected writer and human rights activist, Raja seems like a benign sort, until he warms up to his favourite subject – Palestine. He displays a fiery activism which is tempered by a pragmatic understanding of the situation. His love and yearning for the land of his ancestors shone through the excerpt he read from his book Palestinian Walks.

* Alexander McCall Smith admitted that he had another spectacular talent – he played the bassoon badly. And not just that, he got together with other execrable performers and formed The Really Terrible Orchestra. They even had the effrontery to go on tour to London and New York and had house full audiences. “They weren’t all related to the people in the orchestra,” he clarified.

It was a session titled ‘Words and Music’, and McCall Smith was joined by Amit Chaudhri, a bestselling, award-winning novelist and also a classical musician. (Unfair how some have it all.)

The session started out with promise, but seemed to get too dense and technical with commentaries on the ‘narrative quality of Western classical music’ and ‘music being rooted in humanism.’ It meandered into an academic discourse, and I couldn’t help wishing for McCall Smith to break into an aria.

* At the session on India featuring five luminaries –Shobha De, Vikas Swarup, William Dalrymple, Amit Chaudhri and Venu Rajamoney (Indian Consul General) – I saw the highest number of Indian/Subcontinent attendees than I’d seen in the last four days. It was an interesting choice of panellists. Two bureaucrats, one honorary Indian, one armchair critic and one bumbling poet. (I leave you to guess who’s who!) 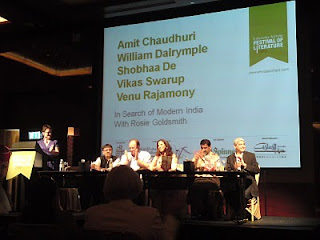 There was the usual range of issues – India shining vs fading, China, Pakistan, poverty, neglect of women, Maoist uprising and so on. Standard daily news stuff. But the debate somehow seemed out of place at a literary festival,despite the fact that they all wrote about India. Shobha De of course lapped the limelight with her strident populist views. But the best retort of the session I thought came from the mild-seeming Vikas Swarup who when buttonholed by Ms De about the lack of government progress in most crucial areas, said, “Perhaps, but then you wouldn’t be having a debate of this sort in China.”

Superb! All four posts. Loved it. The love of books shines through. :)

Janaki: Thank you! I thought I was writing for myself only but thanks for reading the wordy posts. I am encouraged to post more regularly now :)

Your is very informative. thanks for sharing information about food and travel of India.

Thank God food is not the only way culture is handed down & preserved...ha ha ha