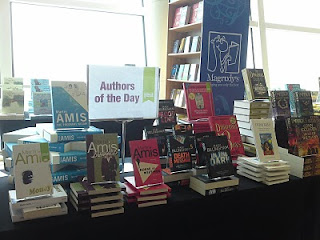 The first session I attended at the Emirates Airlines International Festival of Literature was quite engaging and, for me, set the tone for the festival. It featured Yann Martel, the 2002 Booker Prize winning author who wrote Life of Pi, Bahaa Taher who won the first 'Arabic Booker' in 2008 for Sunset Oasis, as well as poet, Imtiaz Dharker, who shared their ideas on inspiration and what motivated them to write.

Taher started off by affirming that the source of ideas was ambiguous, and that no one could really say where ideas came from. He quoted Socrates as saying that the poet was sometimes the last to understand what he’d written.

Dharker read out an evocative poem which sounded like inspiration was something you had to pursue relentlessly.

Start with mud. Move it,
Excavate with any tools you have,
Trowel, spade, hands, fingernails...

...This is how you draw your human breath
In one pure line across the empty page.

While insisting that inspiration was sometimes highly romanticized, and only a tiny part of the creative process, Martel spoke of it as being a moment of beauty. To illustrate this, he shared his experience of being bought up in a secular household with no interest or inclination towards any sort of religion. But when he travelled to India and found religion so predominant in everyday life, he unexpectedly asked himself, ‘What would it be like to have faith?” That was his moment of beauty, moment of inspiration which produced the highest selling Booker Prize winning novel of all time.

What of the mythical muse then, the moderator Paul Blezzard asked. Martel dismissed it as being an airy fairy concept. “My muse is words, the cadence, the rhythm... There is a reality out there, and we create these representations of it, through words.”

Blezzard then quoted Margaret Atwood as saying, “Writing a novel is the triumph of optimism that you’re going to finish it and that it’s going to get published, that it's going to get read....”

Dharker disagreed. “You don’t write because someone’s going to publish it," she said. "In fact, you write knowing it’s going to be a lost cause. You write because you just just have to.” She shared about the time she wrote her first poem when she was pining for an older man. “He was 12 years old,” she said, causing much merriment, “and had no idea that I even existed. But I just had to write the poem that was in me.”

Taher was quite dismissive about the optimism that sustains some not so worthy endeavours. “I find it strange that some people continue to write even when its futile, producing work that lacks inspiration and beauty. When a writer gets stuck, he or she should stop instantly.”

And then added, to the delight of the audience, “However God is merciful, and takes care of his writers!”

Blezzard then asked, “Martel, you once said that writing a novel is like feeding a tiger. What sustains you?”

And then came the ominous statistics – 97.3 of published writers in the UK have another job that ensures their livelihood.

That’s all right, no one writes for money, said Martel, with the confidence that only someone who fell in the other 3.7% could muster!

He went to share about how an early experience of writing plays (even though they were really bad; ‘a pastiche of dreadfulness’, he called them) instilled in him the sense of being God, of being able to control things. You can be young and poor, he said, and not mind it, because you have the pure joy of being creative. When you’re a writer, your entire world is you and your creation.

Taher, on the other hand, was clear that creativity without inspiration wasn’t worth pursuing. Blezzard pointed out that he spent a lot of time encouraging young people to write even if it was bad writing. I suggest you don’t, said Taher crustily, as the audience applauded his no-nonsense approach.

Martel was asked if his work was semi-autobiographical. He replied that it was only in an intellectual way, and shared that to him art was a product of anxiety, curiosity and joy, going so far as to say that someone who’s always happy is unlikely to be a good artist. Art is created out of a sense of discomfort.

The final word came from Taher who, when asked if writers had to compromise in order to get published, replied that he resisted when editors asked for changes saying, “Sometimes it’s good if a book isn’t perfect.”

The session however was a perfect start to the festival, and even the next session that followed on the ‘Book Club phenomenon’ was quite involving. The debate was lively and there wasn’t a dull moment, which meant I had to focus on the discussion, and not so much on tweeting updates.

Let’s hope the next 3 days are as good, if not better!

What Taher said about writing because you have to makes sense. Keep the reports coming!

Bird: Think you meant Dharker. But yes you're right. It was good to hear that.