Despatches from the second day of the Emirates International Festival of Literature.

There was not a single empty chair in the room for the session with Alexander McCall Smith. And as he was being introduced, I could see why. The moderator had to only announce the name of one of his (60 and counting!) books, and there would be a nodding of heads and enthusiastic applause. When Blezzard asked if there was anyone who hadn’t read The No. 1 Ladies Detective Agency series, a lone hand went up. McCall Smith was among the most ardent of fans indeed.

Highlights of the entertaining session:

* McCall Smith shared that this was his second visit to Dubai. He’d first come here 10 years ago on the invitation of two of his students who happened to be in the police force. “I was touched by their hospitality,” he said, “They not only came right onto the plane to get me, but also had police cars with sirens accompanying our limousine. I thought it was a nice way to visit a place.”

* He started his writing career with the memorably titled No. 1 Ladies Detective Agency, set in Botswana. When asked how he came up with the idea, he shared that he’d visited a friend in Botswana one weekend, when he lived in Swaziland, and saw this ‘traditionally built woman chasing a chicken around the yard’. He thought it would be interesting to write about such a woman.

* The detective agency was also a serendipitous choice. “I could have written about her starting a dry-cleaning agency, I guess, since there aren’t too many novels based around dry-cleaning. But there just seemed to be a lot more takers for the ‘detective agency’.”

* Despite the ‘detective’ in the title, nothing untoward happens in his books. (Incidentally, the preceding session happened to be one on crime fiction!) “I write about the positive and make no attempts to hide it. You won't find a single post mortem in my books,” he said

* He wrote the subsequent books in the series because his publisher told him that he couldn’t end the first book with the lead characters only engaged. You have to get them married, he was told. He took his time though, and with much prodding from the publisher, got them to tie the knot in the 4th book. He’s currently writing the 12th book in the series.

* Speaking of his readers’ involvement with his characters, he shared several funny anecdotes. One of the popular characters in the detective series, Ms. Makutsi, never fails to mention that she’s graduated from the Botswana Secretarial College with 97%. He once toyed with the idea of introducing a character who’d secured 98%. “I was steered away from that attempt by my readers,” he shared, even as the lady seated next to me, presumably an avid fan, nodded vigorously.

Another time, when he spoke to an audience of formidable Texan women, and said that he considered bringing back the character of Mma Ramotswe’s abusive husband, they rose in uproar. “You can bring him back,” one of them said, “but only to punish him.”

“I give all my readers' suggestions serious consideration, before rejecting them completely,” he said, laughing.

* McCall Smith is much loved in Botswana and regarded as their favourite son. The moderator shared that he’d recently been invited to inaugurate their opera house. “That’s a rather grand name for what’s essentially a converted garage that can seat 60 people,” Smith pointed out.  However, it was at that ‘opera house’ that the people of Botswana performed an opera titled, Okavengo Delta, written by none other than McCall Smith. He describes it as a story of a female baboon having ‘Lady Macbeth issues’.

* Unsurprisingly, the film industry didn’t waste time in bringing Mma Ramotswe to life on celluloid. He describes being ‘absolutely happy’ with the way it was produced by Anthony Minghella. And that he even had the privilege of calling out ‘Action’ on the sets one day. Except that the ‘actor’ happened to be a donkey. “I still hoped that on seeing the film, the critics would say, ‘that donkey scene was brilliant, just the right length’, except that it wasn’t even included in the final cut”.

* The search for the ‘traditionally built’ woman to play Mma Ramotswe on film, spanned several continents, but the production team just couldn’t seem to find the right character. Finally the part went to a woman from Philadelphia who had never even been to Africa. She had to learn the body language and the accent, and from all accounts did a great job.

* The talk veered towards the other book series he’d written – Sunday Philosopher’s Club and 44 Scotland St. He stood up to read an excerpt from the latest book in the Scotland St. series, which involved a character called Bertie, ‘who’s remained 6 years old for the last 5 years’. He has an excessively pushy mother who makes him learn Italian, go for yoga classes, and also, go for psychotherapy. As an aside he mentioned, “97% of mother's in Edinburgh are excessively pushy."

* He’s cast well known authors JK Rowling and Ian Rankin in his novels. In one of his books, he has Ian Rankin shot with an arrow and passing by a bookshop where a kid points to a book and says, ‘Hey Ian, there’s one of your books and it’s only 50 pence’.

“Ian’s promised to have his revenge. I might turn up as a body in one of Ian books,” says McCall Smith, relishing the prospect.

* Finally about writing, he said that it wasn't a conscious process. "I don’t think about what I’m writing. I go to the place in my subconscious where fiction is created. I don’t deliberately make it up. I just write it as it comes up." 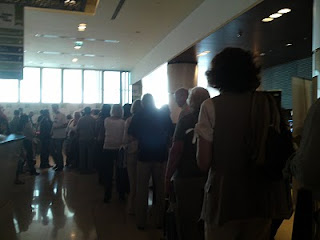 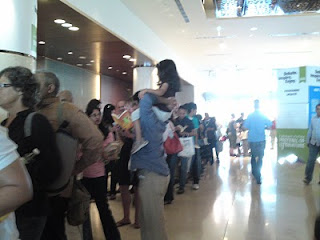 It was a treat to listen to him...as entertaining as his books are

Suma: Absolutely. I haven't tried his other series (apart from No. 1) but would love to now.