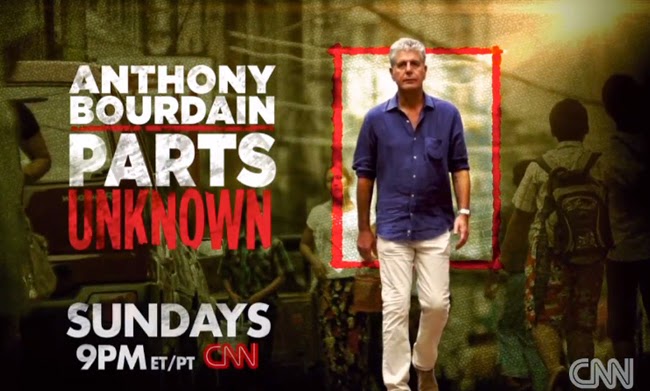 In the past couple of days, we've been to Myanmar, Jerusalem and Columbia, and currently we're in the middle of icy Quebec. Anthony Bourdain's latest series goes exactly where it says it will, to parts unknown, and surprisingly enough, goes beyond just the food in these parts. Without mincing words or attempting correctness of any sort, he addresses the political issues head on. Food happens to be somewhat incidental, although there's a good deal of very delicious and exotic looking food.

In Jerusalem, he launched right into the sticky issue of 'who made the first falafel - the Jews or Palestinians. In Myanmar, he shared a meal with an activist who'd been jailed for three years on a trumped up charge. In Columbia, he got right down to discussing the drug trade with the mayor of a town that formerly thrived on drug money. He wasn't cagey about admitting he was a former coke addict himself.

The great thing about Bourdain is that he's so watchable. You can't wait to see his expression when he digs into a spicy curry or a suspicious offal stew. He always seems to take it in his stride and mumble an appreciative comment. Above all, he tends to step back and allow the interviewee to take centre stage, encouraging them to open up and share about food, politics and life.

nice blog leela! im an english teacher and i have to say you have aamzing writing skills if its you who wrote this. would love to talk to you sometime keep blogging.