Date night with the 'Chef'


On Thursday night, having tucked the bub into bed and leaving overly detailed instructions with the maid, Mr. T and I snuck out to watch a movie in a theatre. It was the second time we'd done such a thing in two years. Yes, we were warned pre-parenthood that something of this nature might occur. Truth be told, for the said two years, we had more entertainment than we could handle anyway, so we didn't miss the cinematic variety. But yesterday, while browsing online for ways to enliven the evening, I spotted a movie that I was sure Mr. T and I would enjoy - 'Chef' directed and written by Jon Favreau, which also features him as the titular character. 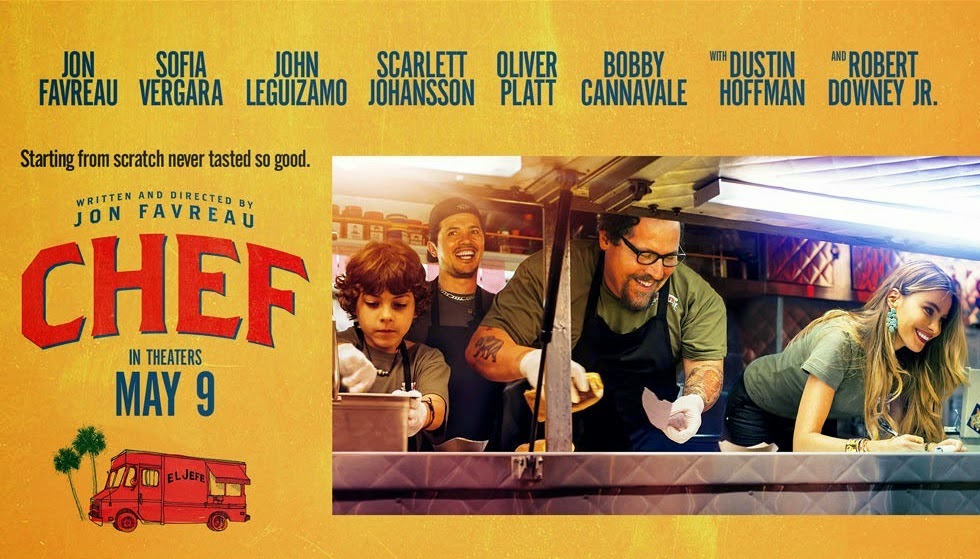 Now, Mr. T is an ad man by profession but a chef by obsession. He loves to cook, and to eat, and there's many a thing I've learned about the finer aspects of food thanks to him. A couple of years ago, on a mini-sabbatical from work, he trained as a chef at a culinary school, which fuelled his obsession further. Since then, he's been toying with opportunities to get into the food business himself.

The movie about a chef who turns down a prestigious yet creatively stifling job to start a small yet innately satisfying venture while also bonding with his young son - seemed to go down well with Mr. T. What had us enthralled though, were the exquisite food shots.

(spoilers here and there)
There's a shot of Chef Carl Casper making his son a simple toasted cheese sandwich, and he makes it with so much passion and precision, as if he were serving it to the most exacting food critic. When his son munches on it and casually mutters, 'it's good', the chef shoots back, saying, "You're damn right, it's good." There's no place for modesty in a chef's vocabulary, I've learned from experience.

Chef Casper gets fired from his job on the eve of a very important evening at the restaurant. He gets home with his brown box filled with fresh, gourmet ingredients. But does he mope? No. He decides revenge is a dish best served hot, and so he starts cooking. Casper's apartment is bare, gray and strictly functional, but his kitchen is alive with color and aromas and artfully created food. The shots of him whipping up a spread are superbly contrasted with shots of chaos in the kitchen that he's just left behind. It all ends badly when he lands up at the restaurant, creates a scene and is thrown out of the place. So we never know what happened to all that wonderful food he made.

Casper somehow gets to Miami with his ex-wife and son, where he undergoes two life-changing experiences. He eats a lip-smacking Cuban sandwich, and his ex-wife's ex-husband lends him a food truck. The relationships in the film are questionable, but one of the most hilarious scenes involve Chef Casper and the eccentric (yet charming) ex-husband played by Robert Downey Jr., where the conversation rapidly moves from carpets to illegitimate children to business.

Although it hurts his pride to accept a handout from the ex-husband, Casper takes the truck and converts it into a gourmet fast-food joint, with a little help from an old friend and his son. Once again, it's time for glorious food shots - sizzling butter, golden bread, tender meat. It's all terribly sensual and appetising.

The food truck rolls through New Orleans and Austin, drawing eager foodies along the way. In Austin, they stop by a place to buy something that looks like charred wood, but which turns out to be exquisite, slow-cooked pork meat. They carve tiny slivers to taste it and groan with such pleasure that it's almost embarrassing to watch.

Of course, it all ends well for Chef Casper. Almost too well, I might add. But it's the kind of movie that you leave feeling inspired. And hungry.