The road to Jebel Hafeet

A few years ago, while on a trek in Ladakh, I stood enraptured at the Advanced Base Camp of the peak Stok Kangri. At 17,000 feet, it was the highest I'd ever been, and my quickened breathing wasn't because of the thin air alone.

Last weekend, standing on top of Jebel Hafeet, the highest point in the UAE, I felt a faint stirring of that old magic. True, the altitude bore no comparisons. At 4,000 feet, Jebel Hafeet was more molehill than mountain. Still, the thrill of feeling a step away from the sky, of being surrounded by jagged outlines of mountains, of looking down at the city with an omniscient gaze - all of it more than made up for the lack of altitude for someone afflicted by acute mountain deprivation.


"The journey is the destination," announced my philosophical friend, M, who was also the guide on this trip. M has cris-crossed the length and breadth of the UAE in his tiny but trusty Mini Cooper, and had been coaxing me to do the drive for a while. My 3-month old car was raring to get out of the traffic-clogged city limits and tear away on the highways. Things came together last weekend. When most of Dubai was napping away the afternoon heat, five of us and two cars set off for Jebel Hafeet, on the outskirts of Al Ain. 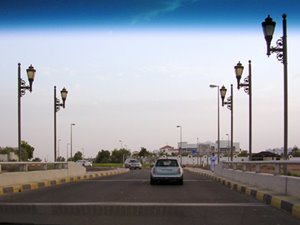 The route between Dubai and Al Ain might have been drawn using a ruler, so rarely does it meander. And that's what made it an absolute pleasure to drive on. Empty roads and a speed limit of 120 - it was everything a newbie driver hoped for. Sand dunes rose and fell like waves on either side of the 6-lane highway. The horizon was mercifully exempt from towering half-finished structures, which dotted so much of Dubai.

Two hours and a couple of rest stops later, we reached the first of the roundabouts which announced our entry into Al Ain. Some of the roundabouts seemed familiar from my previous trip to Al Ain six months ago. But the circuitous route soon turned into a maze and I lost sight of the car I was supposed to be trailing.

Perhaps it was a case of 'bringing the mountain to Mohammed' but even as I was searching for a way to retrace my steps, I saw a sign up ahead which read 'Jebel Hafeet". Quite serendipitously, I found myself at the base of, what has been adjudged, 'the world's greatest driving road'. 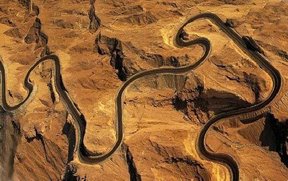 The sun was beginning to set when we started our ascent. Bathed in the evening glow, the craggy, limestone rocks were a soothing sight to city-weary eyes. The AC was turned off, the windows were rolled down. Heads swiveled back and forth not wanting to miss anything. It was hard to imagine that this 'flat-as-an-airstrip' road was hewn right through a mountain. Even my car purred in contentment.

According to some estimates, there are 60 curves en route to the top, and each time we rounded a bend, the view turned even more spectacular. As dusk set in, the lamps on either side of the road lit up, turning limestone into gold. The peak now resembled a dazzling tiara. Undoubtedly, a good deal of planning had gone into this route. There were emergency parking areas after every 150-200 metres, and observation points with ample car parking at two or three places.

A cool breeze was blowing when we finally reached the plateau at the top. There were almost a hundred cars parked all around the periphery, with people spilling out of them � families with picnic baskets, kids, even a few pets. There were more hordes milling around the vapidly titled 'Top of Hafeet Mountain Cafetaria'. There was even graffiti scribbled all along the surface of the peak. 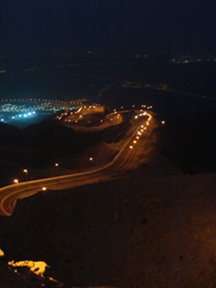 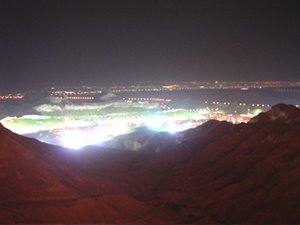 A bit of the magical spell cast by the drive up the mountain was broken. But we found a tiny quiet spot to take it all in, and to gaze at Al Ain below. The city was ablaze with lights. The snaking route below, bathed in an incandescent light seemed almost surreal from our vantage point. We took a few pictures, walked around the periphery of the plateau and then headed back.

Perhaps M was right. The journey is the destination�
Signed, Leela A at 10:06 pm

Jabberwock: Thank you! Btw, you get a prize for the first commenter on my new blog. Send in your mailing address, quick. :-)

Ummm...my comment on the other post did not get through? And I could not post earlier since the box said 'rights of admission restricted' or some such thing. Consolation prize?

Nothing beats a great drive. :)

e: Sorry about those settings, have changed them now. Consolation prize is on - send in your address :-)

Smiley: You bet! We did another one last week. You'll hear about it soon.