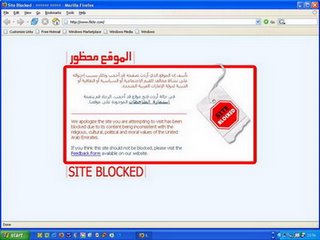 It's not uncommon to come across a sign like this one while surfing the web in the UAE. Etisalat, the sole service provider, has the onerous responsibility of protecting the religious, social, cultural and moral fabric of the UAE, and so goes about its job with righteous zeal. Initially I was a bit amused by the blue sign - putting it down to another of the quirks of the Muddle East, until I found www.flickr.com inaccessible. No reasons were offered as to what was found objectionable in a photo site. Using the feedback form proved futile too. Since I used to upload most pics for the blog on Flickr, this development was downright irksome. But the greater struggle was in trying to reconcile the anachronistic censorship in a “progressive” and “modern” city like Dubai.

While we chafe at the moral policing in this corner of the world, freedom of speech has stirred up more than a hornet’s nest in another part of the world. Jyllands Posten, the Danish newspaper, might have anticipated ruffled feathers when they printed a dozen caricatures of Prophet Mohammed as an expression of their right to free speech. But they couldn’t possibly have envisaged the extreme backlash all over the world. “Clash of civilizations”, some editorials have called it. The outbursts have reached ludicrous levels with embassies getting torched, bomb threats and a rash of riots around the world. Free speech has never had to pay a higher price.

Which brings us really to that all-important question – Is free speech really the absolute it’s made out to be? While there’s absolutely no justification for the violent response from some sections of the Muslim community, there seems to be no excusing Jyllands Posten either. Is freedom of speech more supreme a virtue than tolerance and respect for another person’s beliefs?

The gratuitous expression of free speech is as bad as censorship of the media. Both extreme. Both unwarranted. If there ever was a middle path, a way out of the madness, then this – www.sorrynorwaydenmark.com - would be it.
Signed, Leela A at 10:42 pm