The Dubai Marathon 2006: A little high, but mostly, dry

I was halfway through the 10 km run when the mild irritation turned into full blown steam. Up ahead, I could see the bright yellow marker with 6 Kms. inscribed on it. Standing on the right side of the broad, empty road was a Marathon volunteer in a bright yellow T-shirt. I waited until I was in his earshot and then hollered:

The volunteer, whose hand was in midair waving at me, looked sheepish. And then with a shrug said, "Ahead."


Friday morning at the Standard Chartered Dubai Marathon 2006 saw international runners, parachutists, life-sized toons, a few thousand runners, a few million green and blue balloons... but when it came down to providing the single most essential requirement for a run, someone had been sleeping on the job.

The Marathon was originally scheduled for January 4th when temperatures are below 20 degrees. It was postponed on account of Sheikh Maktoum's death to mid-Feb. On Friday, the temperature was close to 31 degrees C.

Further, the manual given to each participant at the start of the race clearly stated that there would be water stations every 5 Kms, which isn't the most ideal in any case. There ought to have been water provided every 2 1/2 - 3 Kms.

Finally, there was my own adherence to the rule book. I drank two glasses of water at 5 a.m., because the manual stated that one should drink water 2 hours before the run. So I was suitably depleted by the start of the run.

The fanfare and excitement proved to be a good distraction for the first few kilometres. I couldn't help pointing out the runners in costume to K, my running buddy. One had bunny ears and had a little tuft pinned on the back of her T-shirt. Another had a green nylon costume which I presumed was a frog of sorts. A third had butterfly wings. There was even an 'Old Mother Hubbard' with voluminous skirts and braided hair.

It was around the 4 Km. mark that the novelty wore off and the heat and dehydration set in. 2 Kms. later fury was added to the mix. How could the organisers have overlooked the provision of water? I finally spotted a water station on the other side of the road. Apparently, we were supposed to run all the way to the roundabout on Zabeel Road and get onto the other side to reach it. I estimated it would be around 8 Kms by then. I was beginning to work up more than a sweat.

The lack of water worked on my febrile mind like an obsession. The more I thought about it, the more I got incensed by the organisers' callousness. Other aspects about the run, which I would have barely noticed before, also stoked my ire. The 10 km. route which went past the Trade Centre and then onto Zabeel Road was exceptionally bland, whereas the 42 Km. marathon route went all over Dubai. I understood there would be logistics involved, but running up and down the same deserted stretch was undeniably boring.

There was a nasty surprise in store when we finally did reach the beleaguered water station around the 8 Km. mark. There was no water. Sanitation workers in orange overalls were clearing away the plastic cups and half-empty mineral water bottles strewn on the road. There was not a single volunteer in sight. Which was a good thing. Because at that point, you could have held a dry match under my nose and it would have burst into flames in an instant.

There was no option but to focus and run the last 2 Kms. Seething about the invisible organisers or worrying about collapsing from dehydration only made it tougher. I was feeling ok, and the sun hadn't become searing hot yet. So K and I just kept up a steady pace until the finish sign came into view. We sprinted the last 200 M. so that we could complete the run under 80 minutes. Incidentally, the winner of the 10 Km. race clocked in at 32.56 minutes.

We were handed medals as we entered the enclosure behind the Finish gantry. Complaining to the volunteers seemed futile at that point because not only were they preoccupied with taking away the chip embedded in the running bib, but also because it required energy, something I had all but run out of.

Comparisons are odious, but I couldn't help commenting to K, how much more thrilling the Bombay Marathon had been. Even though it was an uneven terrain, more humid and more chaotic, it was also a lot more colourful. If the 42 Km. run was the showcase event and the 3 Km. run was for charity and cheer, then the 10 Km. run fit nowhere in the scheme of things.

Possibly the only uplifting moment was watching the Marathon winner, Joseph Ngeny from Kenya, effortlessly race to the finish line, clocking in at 2.13 hours.

Will I run another Dubai Marathon? Most probably. But until then, i'm going to take a lesson or two on water retention from the camel. 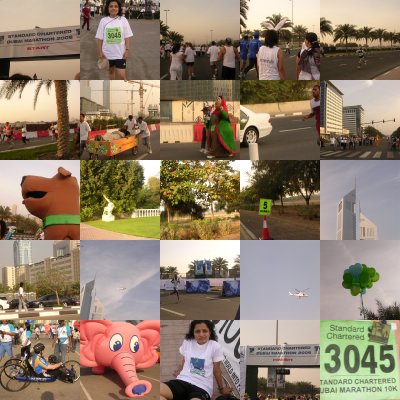