A glimpse of the desert

Doing a desert safari in the UAE is a bit like getting your picture clicked at the Eiffel Tower in Paris. It’s the touristy thing to do. And like most touristy things it looks good in pictures and ranks high on the ‘been-there-done-that’ scale. But it also feels a little dissatisfying, especially if packaged tours are not your idea of the right way to experience a place.

Having said that, I quite enjoyed the all-too-brief tryst with the dunes. Dubai does a great job of camouflaging the fact that it’s actually a desert. And in all the time I’ve been here, I’ve only heard travellers’ tales of the stark beauty of the desert. It was time to make an introduction – a formal one, albeit. 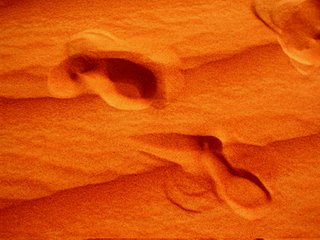 Desert safari operators in Dubai are a dirham a dozen. So considering it was the month end, we chose economy over effusive claims, and signed up with Fairyland Tours for 165 dirhams per person. Mustafa, our driver, arrived sharp at 4 p.m. to pick us up, and we set off to meet the rest of the group.

One of the redeeming features of Dubai is that you can get out of the city and cruise on the open roads in less than 20 minutes. The Dubai–Hatta Road was almost deserted on a Friday afternoon and we hurriedly rolled up the windows as the speedometer touched 140. The distances between the houses on either side of the road increased until only sandy hillocks and sparse trees were visible. Sand particles flew onto the road and receded like waves as vehicles sped by. The hour passed by unnoticed. 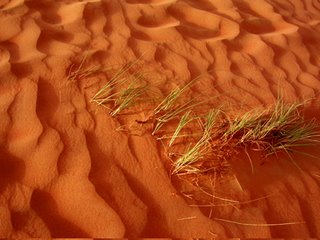 We reached an incongruous café and souvenir shop on the side of the road. People spilled out of half a dozen SUVs parked there. This was the last halt before we entered the dunes. While some used the opportunity to buy colas, chewing gum and other essentials, the drivers of the SUVs began preparing for the Dune Bashing (as the ride on the sand dunes is popularly called) by deflating the tyres. Apparently, flattened tyres ensure the vehicle doesn’t get stuck in gritty terrain.

Suitably deflated, our vehicles climbed into the dunes, which at first glance looked rather tame. There were mild undulations in the terrain, which stretched out for as far as the eye could see, and for someone who’s been awed by the topography of the Himalayas, this was not something to write home about. 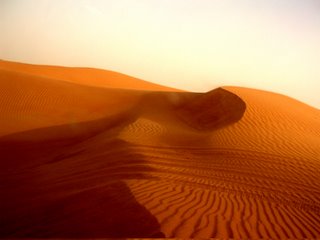 I was unmoved when Mustafa began gearing up. First he pulled out a pair of wraparound shades. Then he fished out a zutra – a traditional Arabic headgear – and performed some complicated maneuvers before patting it down on his head. Next he asked all six of us in the vehicle to wear the seatbelt. Dune Bashing, indeed, I thought, rolling my eyes and blowing on my nails. This was going to be a ride on S.V. Road in Mumbai post-monsoons.

Dune Bashing requires special driving skills. Drivers usually have to undergo basic training and need a certification for desert driving. Mustafa mostly drove with one hand gripping the handle above the door and the other hand twisting, turning and pummeling the steering wheel. There were nervous giggles and muffled screams in the back when we went into a 45 degree slant or when we careened down the dune. Interestingly, the SUVs which customarily dominated the roads with their haughty presence, now seemed like little beetles scuttling in the sand. 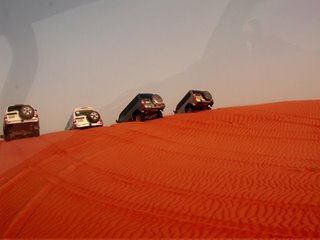 We rode dune after dune in this similar jerky manner, and while my heart didn’t do any somersaults, I was dismayed to note that my stomach did. I had to ask Mustafa to stop the vehicle twice, and he willingly obliged. ‘Mostly happens with Asians’, he muttered, handing me tissues, and adding to my discomfiture.

The sun was a molten orb on the horizon when we made our next halt on the peak of a dune. Surfboards were brought out and those interested could surf down the dune. My friends and I tried it before we decided it sounded more exciting than it actually was. The ride was over in less than 10 seconds and climbing back up the dune with a heavy surfboard turned out to be an unanticipated aerobic activity. 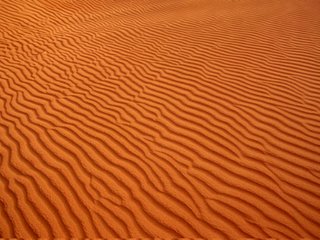 Back in our vehicle, we headed to the campsite for an experience of Arabian culture. This included smoking (or for the inept, choking) on the sheesha, camel rides, henna tattoos and even dressing up in the hijab (for women) and the kandoora (for men). UAE law prohibits non-Emiratis from donning the national costume. However, an exception is made during safaris as long as one doesn’t step out of the campsite.

The perimeter of the camp was lined with tents where people could stretch out and allow their dune-bashed innards to recover before heading for the bar or for any of the other attractions. We took our time before heading to each of the tents where we got the henna tattoo, smoked an apple-flavoured sheesha and rode a camel called ‘Jaani’. The most novel part was posing for photographs wearing the hijab. There’s a certain mystique attached to the hijab, which cloaks everything but the eyes. For the few minutes that I paraded in it, there was a sense of having a secret vantage point to the world, of being more in control than those whose faces reflected every emotion, of being able to retreat easily into an inner space. But like I said, for me it was a novelty. A person required to wear it might opine differently. Or might not.

The star attraction of the evening was the belly dancer, who took to the podium in the centre of the camp. We watched for a while, but quickly tuned off when she began inviting members of the audience to dance with her, and who proceeded to imitate her moves to dreadful effect.

Soon, we were hustled into the food tent for an Arabic barbecue along the ubiquitous Indian food. It was 9 p.m., just 5 hours since we’d left home, although it felt like ages. Mercifully, we didn’t have to ride over the dunes to get back to the highway or I might just have done my Asian roots proud again. We reached the Hatta road in less than ten minutes and were home by 10 p.m.

A fun trip, no doubt, but I have a feeling that the real desert escapade is yet to come…
Signed, Leela A at 11:22 pm

well described, but, u also wrote in ur blog tat there is a law that abides men wearing the kandoora. Plz remove away this misunderstanding, as there is no such law.