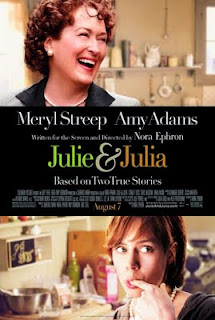 I hesitated before watching the movie Julie & Julia on the flight. I'd recently been gifted the book by the same name, and I didn't want to spoil my enjoyment of the book. But anyway, given the choice of movies offered on the flight, Julie & Julia seemed the lesser evil.

The book is about an unhappy woman who in a moment of despair decides that the way out of her melancholy is to cook her way through a French cookbook written by Julia Child. And to blog about her adventures/misadventures. I loved the theme given my interest in cooking and, well, blogging.

Interestingly, the movie is based on not one, but two books (three, if you count the cookbook!) One, being Julie Powell's cook-blog. The second, is Julia Child's memoir of her year in France when she really learned to cook. And that really is the saving grace of the movie.

Meryl Streep is magnificent as Julia Child. From the first scene where she falls in love with Paris, to the last, in which her portrait hangs a museum, you get a sense of her passion for cooking. She starts out as the somewhat bored wife of a diplomat who in order to find something to occupy her time, takes cooking classes, and ends up not just mastering elaborate French cooking, but also writing a book about the same.

The movie intercuts between Julie's attempts, most of which turn out surprisingly well, and Julia's journey. But the former sorely lacks the passion and joie de vivre of the latter. Apparently, when the real Julia Child was asked what she thought of Julie's blog, she mentioned that she hated it.

I haven't read the book yet, so I'll reserve comment. But let's say the 'Julie' part of the film Julie and Julia was a little bland on the palate.
Signed, Leela A at 10:22 am