It took Kirk 6 years to learn how to eat the normal way. Until then, he'd been fed through a tube in his nose and later, through a tube in his stomach. Unlike his twin, Jadyn, Kirk had been born with a vocal chord dysfunction, which not only made speech, but also normal swallowing impossible.

Give it time, he'll get better, doctors told my friend, Ro, year after year, surgery after unsuccessful surgery. And Kirk grew up knowing that he should never put things in his mouth, not even by accident. It was heartening to watch Ro hand him a chocolate chip cookie with the instruction, "Only to hold, not to eat." And Kirk would be content doing just that. Once in a while though, he'd grab Jadyn's water bottle wanting a few drops of water to trickle down his throat. It would, more often than not, result in a coughing spasm which brought tears to his eyes.

In every other way, he was a playful little boy, the more mischievous and boisterous twin. "Ya-ya," he rasped, when I met them for the first time two and a half years ago. "Not Ya-ya," corrected Jadyn, "her name is Yee-ya."

There was another surgery scheduled last month. And Ro, who had held onto every hope, however slim, had even thought about approaching a Shamanic healer just to help them get through the surgery.

A week ago, I received a text message from Ro, "Kirk is swallowing well and is now allowed to eat pureed food under supervision."

I could only imagine the look of triumph on all their faces watching each spoonful going down. What could be a better birthday present for a 6-year old than finally tasting his own birthday cake?

So to the awesome twosome who turn 6 tomorrow, wishing you a truly magical, special day. And an unshakeable faith in miracles. 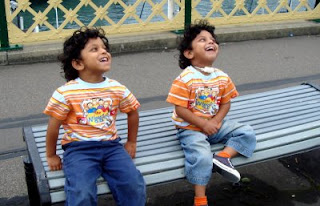 A little more about the twins here, here and here
Signed, Leela A at 10:07 pm

Leela, you have resumed blogging! Refreshing like the rain after a long dry spell.

Loved "Be prepared" as well as the post on the twins, they have grown. Happy for Kirk. He continues to have a place in my prayers.

it amazes me how you meet such awe inspiring individuals!!! maybe cause you are one!

thanks for sharing and wish the 2 bright boys a very happy b-day from me too! God bless them!

"What could be a better birthday present for a 6-year old than finally tasting his own birthday cake?" That's a killer line - and a most touching thought!

Ditoza: Your kind words are like rain after a long dry spell. Thank you.

Minal: I am honoured.

Last Mallu: Thanks. Hope you are well.

My daughter too has had tracheostomy done when she was a year old. I can very well relate to what Kirk's parents might have gone through. Best wishes to Kirk.

Lee, I'd missed out on this one. Was reading through your posts today to see if I'd missed something. I remember him from the earlier posts. When I read this one couldn't help crying. God bless the boy.