Intrepid in Iran: Day 1 - Getting there

* “I don’t know if I’ve mentioned this to you, but you’ll need to cover your head and your butt,” wrote Sonya in an email, a week before our proposed trip to Shiraz in Iran. I was about to mail a droll reply about how my low-rise jeans weren’t all that low, when she sent me a link to the dress code for tourists in Iran.

The idea of a dress code for tourists in itself seemed remarkable. And then the thought of wearing headscarves and full-sleeved, butt-covering tunics felt a bit archaic and chauvinistic, even. Gaurav, the sole male presence in our 5-member troop, attempted to console us by declaring, “I totally understand. Even I can’t wear my cutoff trousers.”


* Apparently, no one in Dubai covers their butts. I combed every store in Lamcy Plaza and could barely find a top long enough to disguise the (rather unmistakable) fact that I have a butt. I somehow managed to cobble together a wardrobe for the 4-day trip. But when I reached the airport, 4 pairs of eyes zeroed in on the two exposed inches of denim-clad gluteus maximus. When clenching or shirt-tugging didn’t work, Sonia pulled out the ‘emergency robe’. My first thought was that it looked like a bathrobe. But it did an admirable job of not only obscuring my posterior, but also every other non-linear shape neck below.


* “What happens if you don’t wear the proper attire in Iran,” I timidly asked Heeba, the American-born, Dubai-based Iranian in our group. “You go to jail,” she said, with utmost seriousness. “You must understand, it’s not a custom, it’s a law.” I pulled the bathrobe around me tighter.

Anachronistic, chauvinistic or whatever else Iran may be, I had made the choice to visit. And I didn’t have to agree with the rules, I decided. I just had to go along. So when the plane touched down at Shiraz International Airport, like every other female tourist on the flight, I patted my headscarf into place and disembarked.


* ‘Iranian Cultural Heritage Handicrafts and Tourism Organisation would be highly grateful if you could kindly fill the following form and hand it over to the officials’ – read the flimsy yellow flyer we were handed at the airport. One of the few perks of being an Indian travelling to Iran was the Visa On Arrival status. But this form seemed a bit too informal for an officious document.

Apparently, it was. On filling of yellow flyer, one was handed a handwritten slip with visa fees, which had to be paid at another counter, following which another more officious-looking form had to be filled and handed over along with passports for the visa to be processed.

“How much time?” we asked the polite but harried staff on duty. “One hour at least,” he said, with an excessive emphasis on the last two words. “Maybe they’ve never had so many tourists visiting,” whispered Heeba.


* I expected to see beady-eyed, long-bearded officials skulking around the airport, looking out for inappropriate attire or manners, but most of the staff – all male, incidentally – seemed unconcerned, a bit bored, even. They didn’t even raise an eyebrow when a gaggle of kids from the French tourists’ troupe proceeded to knock down the stands while playing a boisterous game of tag. A little reassured, I sank into the airport chairs and nodded off a bit.

Two hours later, and just seconds before the next international flight arrived into Shiraz, we were handed our passports and visas.


* WELCOME TO SHIRAZ, said the banner just above the exit.


Coming next: Day 1 - The ruins of Persepolis 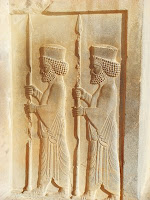 Wow! u in Iran! I will gorge on to everything that u come up with now.. also that dress code thing was new for me...

Wow Leela! You seem to be visiting a lot of places around the world.......I absolutely love your blog. Was introduced to it some time ago by Ashok and I keep coming back for more ever since then.Love to read everything you write.
-Lynette

I watched Persepolis, and that for me is Iran.

I checked out the dress code thing. was laughing at this one-

"In summer and hot weather, you can cheat(!) and not wear shirt under your coat/manteau. Who understands?!"

Smileawhile: Thank you, thank you. You maintain a good one yourself.

Sonia: See that's one of the reasons why I went to Iran. I wanted to get a first hand view of the place. Not that one can understand it completely in 3-4 days, but at least it's a new point of view. And yeah, I thought that line was quite funny too.

Your blog keeps getting better and better! Your older articles are not as good as newer ones you have a lot more creativity and originality now keep it up!