It's hard not to be impressed by Atlantis at Palm Jumeirah. Driving down the trunk of the Palm with swank buildings on either side, you can see Atlantis looming ahead. By the time you've passed under the lofty arches and have reached the entrance, your imagination (mixed with a bit of buzz and hype) is in overdrive. And while projecting a nonchalant air on the outside, you're in fact a giddy schoolgirl inside, dying to get to class the next day and announce, "You'll never believe where I was yesterday!" 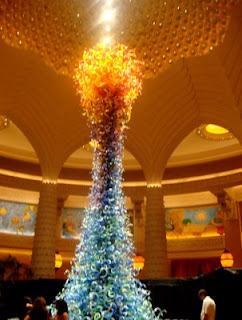 Three weeks ago, a fire broke out at Atlantis which started in the main lobby area, just above this glass sculpture. Although the resort opened as planned on September 24, you can still see signs of restoration (behind the black screens) and get a whiff of charred remains. Somehow this only adds to the aura of Atlantis. Unlike the fabled city which sunk overnight, the Palm Atlantis virtually rose from the ashes, in time to meet the public. 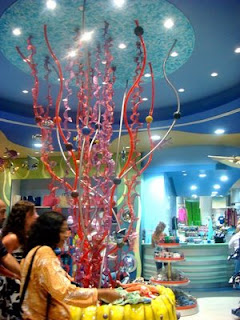 The souvenir store at Atlantis. Where you can come away with cuddly sharks and jolly jellyfish. 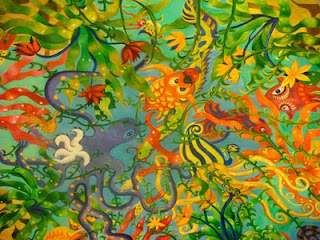 A glimpse of the ceiling. A nautical theme runs through the Atlantis, but it feels a bit uneven in parts. Something like The Little Mermaid meets the local fishmarket. 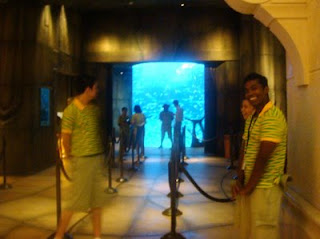 The entrance to the Lost Chamber. This was the best part of the entire Atlantis experience for me. (I haven't checked out the Aquaventure theme park and its 'Leap of Faith' ride yet.) 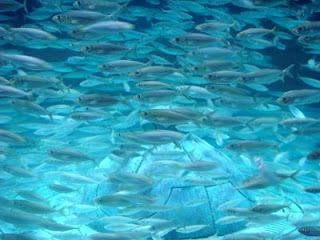 The last time I'd been mesmerised by aquatic life was when I was snorkelling in the Great Barrief Reef in Cairns, Australia. Nothing can ever compare to that sublime experience, but watching these beautiful creatures glide so blissfully, I couldn't help feeling that I could watch them for hours and still come away marvelling. 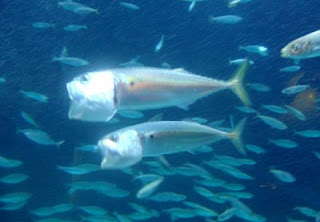 These fish reminded me of (what I know as) ladyfish, until they opened their mouth, and some membranes popped out, with the end result being rather comical. 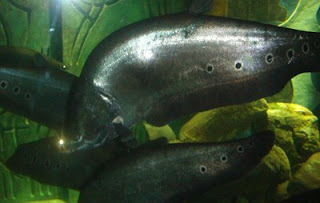 Buttoned-down tuxedos. What the well-dressed fish are wearing. 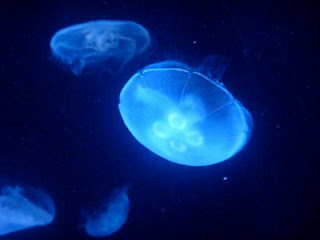 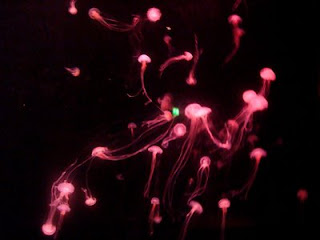 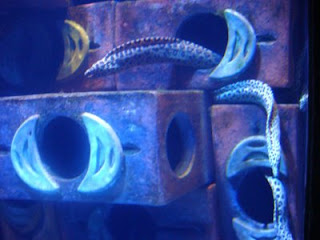 You cannot appreciate the phrase, 'slippery as an eel', until you see this exhibit. My efforts to get an entire eel in a picture was repeatedly thwarted by their ceaseless darting through the enclosures. 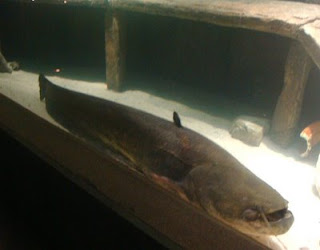 You don't want to be alone at home with this critter. Nuff said. 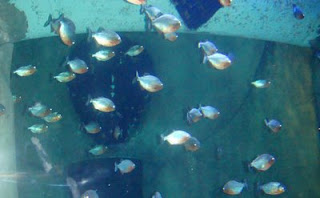 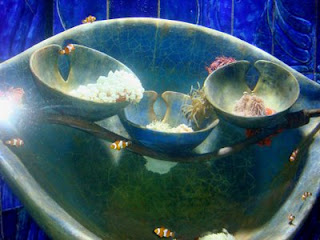 The little 'Nemos' or clownfish. I also spotted the rescued whale shark gliding majestically in one of the aquariums.

There's a better way, I discovered later, to experience this marine life, than running around the aquariums, gawking at the fish and pressing close to the 2-feet thick wall of glass.

The Lost Chambers Suites, on the other side of the glass wall, have the better view. But for sheer indulgence, there's nothing to beat the $25,000-a-night Bridge Suite replete with personal butlers and chefs, and a gold-leaf dining table.

Humans and nature or humans v/s nature - the debate raged in my mind as I drove back home. Environmentalists have been concerned, people have protested, and even the old nutjobs are ranting.

What really caught my eye when I was reading about the fabled city of Atlantis was this bit...

... there existed an island nation located in the middle of the Atlantic ocean populated by a noble and powerful race. The people of this land possessed great wealth thanks to the natural resources found throughout their island. The island was a center for trade and commerce.

...For generations the Atlanteans lived simple, virtuous lives. But slowly they began to change. Greed and power began to corrupt them....

...Soon, in one violent surge it was gone. The island of Atlantis, its people, and its memory were swallowed by the sea.

Let's hope this recrudescence does not suffer the same fate. There is enough power and greed around to justify that scale of diluvial damage.

Beautiful, Atlantis finds its way in all our regional newspaapers hese days even in our corner of India. Thanks for introducing to this phenomenon ???!!! Where will the petro dollars reach???
marline

Palm reader: I hope not too. Interesting choice of name though.

Marline: So when are you coming a-visiting? :)

i know - 'e is clever that way. looking forward to the pics from your persian caper.