Right on target. It's been unimaginably hectic catching up with family, meeting old friends, shopping, trying to unwind, plugging a leaky nose and remembering to check the wrong side of the road before crossing. I was in Mumbai for a couple of weeks on a trip that was as unexpected as it was welcome. The timing was exquisite – close family from abroad was visiting, as were old friends from College who I hadn't met in years. Going back this time had happier reasons, and all I could do was count days and hours until I touched down in Bombay

The days zipped by, as they're wont to do when you're having fun. But there were moments which stood out; the kind you want to store and replay at a later date. Some of them were funny, some poignant, and some others which made me smile and think, 'Only in India…'

A day after I returned, I was walking back home, up the narrow slope leading to my lane, when I heard a symphony of blaring horns. An empty autorickshaw stood in the middle of the road. The driver was standing beside the vehicle, insulting the women folk of the driver in the green Santro, and also trying to assess the damage to his shattered taillights. He seemed in no hurry to stop either of the two activities, despite the fact that the BEST bus behind the Santro seemed ready to steamroll both vehicles and their respective drivers. The four autorickshaws, one motorbike and two cars behind the bus had no idea what was holding things up, but they hoped their strident horns would create a clearing in the snarl ahead. The spectacle was amusing and comfortingly familiar. I walked home with a smile.

There was nostalgia of another kind when I took the 5-year old 'bess friend' for a movie she wanted to see - Hanuman. The last movie we'd gone for - Polar Express at the IMAX Dome Theatre - had been a bit of a washout. Ten minutes into the movie and she was thoroughly bored, and kept looking longingly at the exit. Hanuman turned out to be a surprise package. The animation was excellent; the soundtrack, delightfully peppy and the narration, engrossing. I was relieved to see Alison dancing in her seat. When war was declared on Lanka, I was hooked. The arrows flying thick and fast reminded me of Sunday mornings many many years ago, when we used to run home from Church to watch 'Ramayana'. (The irony hadn't sunk in then.) It reminded me of those entire episodes devoted to those incredible, flying arrows - the single-arrow-mutating-into-many arrow, the lightning-head arrow, the midair-shape changing arrow... It all came back vividly, right down to the dismayed expression on the face of the archer whose arrow was annihilated. I was enjoying myself thoroughly, when a plaintive voice rung out, loud enough for the whole theatre to hear, "Leela, when does the movie get over!" Goldfish and Alison have a lot in common.

A pilgrimage to the Strand Bookstore was mandatory. Books, when one can find them in Dubai, are prohibitively expensive. Besides, there's only one incredible Mr. Shanbag. I can't remember a single time when I haven't been treated like a VIP customer, even if I've only gone there to browse. This time, I came away with a sizeable haul, but without the slightest twinge of guilt. Dirhams be praised! The ever-courteous staff not only weighed the books to ensure I wasn't going to ground the aircraft, but also reminded me that they could ship me me consignments of up to 5 kgs. for just Rs. 500. I spotted another VFM (or value for money, in ad lingo) offer on a poster in the shop window. This should explain why friends will receive, 'Love poems by Love Poets' in lieu of a Christmas card this year. 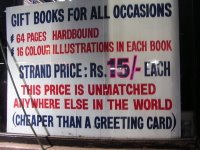 Five months is too short a time to make statements like, 'Nothing's changed back home', but I was surprised at how easily I slipped back into old routines. Like sipping my mother's strong tea in the afternoon, cornering the PC at home and wearing down the remote with my frenzied channel-surfing. Old allergies returned to torment me as well, and I spent many a precious day sniffling and clutching a heavy head. But there were huge departures from my prior experience as well. Like the time I handed over a Rs. 100 note to the person at the Borivli Station ticket window. My eyebrows shot right off my forehead when the teller first apologised, and then, very politely, requested me to check if I had a smaller note tucked somewhere in my purse. I managed to locate the requisite change, when the teller from Mars continued, "Actually, I shouldn't be asking you for change. But I feel helpless right now. Thank you for helping me out." I looked around for hidden cameras or for Cyrus Broacha to jump out from a corner with the funny cap. This certainly wasn't the Western Railway I'd known for years!

There was another interesting episode at the ticket window at Churchgate Station. The queue, made up mostly of men, was inching
forward, when a woman of formidable girth jumped the queue. The men hissed disapprovingly, but intimidated by her size, said nothing. Until one braveheart called out from behind, "Excuse me Ma'am, we are in queue. This is not fair."Ma'am coolly replied, "It's fair. If you want, I'll buy your ticket as well."The braveheart sputtered at this unanticipated offer, "That's not the point..." But by then she'd collected her ticket and walked away, delivering a gem of parting shot, "What's your problem? Don't you know how to respect a lady!"The braveheart hasn't recovered, I suspect.

My 'Priceless Pictures' collection grew a bit in Bombay, thanks to gems like these.

Spotted above a ticket window at Borivli Station. 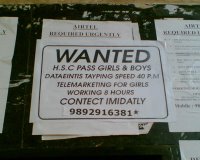 Spotted outside a building complex at Bandra. Canine literacy must be especially high in this area... 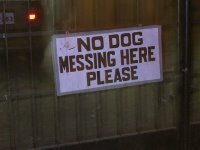 There are still some places in Bombay where you can avoid the rush hour completely, where crowds are conspicuous by their absence and where the only sounds you hear are the lapping of the waves and the rustle of the wind in the tall grass. One such place is Manori. Not the popular beach area, but a little way ahead where the craggy rocks end in the sea. I had the good-fortune of going rock-climbing here with a friend, who regularly organises getaways of this nature. (His website if you're interested.) It had been almost two years since I'd done any climbing, but it still felt as good. The muscles protested fiercely the next day, but the vacation felt complete. 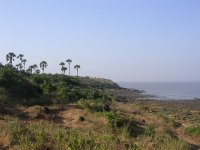 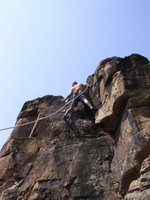 Ambivalence ruled when it was time to leave. It had been a wonderful trip, but I was also looking forward to getting back to the Muddle East, which was slowly beginning to get a little un-muddled. The official at the check-in counter frowned when I offered my bags to be weighed. I'll never shop at Strand again, I swore fervently. I got away with an injunction to "Carry less than 8 kilos in hand baggage next time."Whew!

Stepping aboard the Indian Airlines flight, I was confronted by a sizeable, pot-bellied Steward who greeted me with a gap-toothed smile. It took me a few moments to recover, but I told myself I wasn't going to be judgemental about the national carrier. Still, I was reminded of Rhyncus's experience a few months ago, and wondered what else was in store. I didn't have to wait long.

I was engrossed in one of the new books when they announced that the film 'No Entry' would be shown. I was curious to know what had made it such a hit, so I plugged in the earphones, and looked at the single screen in front of the middle aisle. The opening soundtrack began. The screen was blank. The dpening dialogues began; Anil Kapoor, I could tell. The screen was blank. I looked around, wondering if I was the only one who had a problem seeing anything on the screen. Nobody else looked nonplussed. I leaned as much to the right as I could without giving the person in the next seat any wrong ideas. Finally, it sunk in. No Entry was a no-show; the entire film was going to be played only on the headphones. No one else was complaining. Indian Airlines regulars, I thought and went back to the book.
Signed, Leela A at 10:22 pm

Themes Only in Bombay