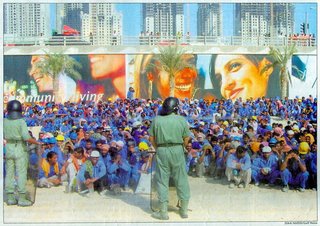 
There couldn’t be a better picture to capture the poignant contrast that is Dubai. Lofty skyscrapers, mammoth billboards touting beautiful properties for beautiful people, and below it all, a jarring intrusion of almost-humans into a lovely fantasy.

Two days ago, almost a thousand of these almost-humans marched onto Sheikh Zayed Road and with unbelievable audacity squatted on it.

The road-watch RJ sounded surprised as she alerted commuters about this phenomenon. She wasn’t the only one. Even after the police arrived and herded the labourers to the side of the road, traffic continued to crawl, as drivers unaccustomed to the sight of protesting labourers, stopped to take in the spectacle. Traffic in the opposite lane slowed down for a similar reason.

A strike in Dubai? It sounded as abnormal as, well, rains in the desert. It turned out that the workers had taken to the streets to protest non-payment of wages for months. They couldn’t have chosen a better time (7.30 a.m to 9.30 a.m.) or a better place (the arterial Sheikh Zayed Road) to draw attention to their plight. Ripples were felt all the way down to Makhtoum Bridge, which was choked with cars and irate drivers.

The Labour Ministry came down heavily on the employers, Abu Dhabi-based Al Hamed Company for Development. They were ordered to pay salaries within 24-hours, faced a fine for delaying salaries and also a recruitment ban for 6 months.

Suddenly, the invisible almost-humans became celebrities. Photographers rushed to their camps; sound bites were recorded, their sorry lives and living conditions were documented.

Even the company’s administration manager was spoken to, who said,

"The reason why the workers succeeded in their protest is because they were large in number. Otherwise they would never have dared to do anything like this."

I mean, who in their right mind, would dare to demand clean drinking water or water to have a shower after a hard day's work in the sun. Or ask for facilities to cut fruits and vegetables. Or even require proper sewage facilities and, goodness, modern toilets. Why would almost-humans require all this, eh? And, on top of it all, demand salaries?

Following the 24-hour ultimatum, Al Hamed started paying out salaries but also managed to wrangle out extra time complaining that they could not pay all workers in one day.

How do you expect us to pay 6,000 people’s salaries in ONE day, they pouted. “We have to pay more than Dh5 million in salaries. There's no way we could have done that in 24 hours.”
Another erudite comment was made by a professor of political science of the UAE University.

"The stature of the UAE is superior to any other factor. Unfortunately, there are national companies… who harm the image of the country by abusing rights of workers.

That’s right, you awful national companies. Pay up your workers’ wages to uphold the stature of the UAE. Not because the almost-humans have worked for it.

No workers were arrested during the protest, Gulf News informs us.

An article in the Khaleej Times today elaborates a bit on the psyche of UAE labourers.

Interestingly, all these men believe that fate has brought them here and they have never considered the fact that they can ever be allowed to bring their families here and lead a happy life…

…The fatalism also helps them psychologically, makes it easier on them. "This is how we are meant to spend the rest of our life," they say.

Quick, bring back the lovely fantasy, the lofty skyscrapers…