The heavens opened up the day after I left Bombay for Dubai. So no ‘first rains’ for me this year. No smell of fresh earth, no roasted bhutta, no wrinkled toes in rubber shoes. Just second hand accounts from news sites, mails, blogs, and photographs, like this one… 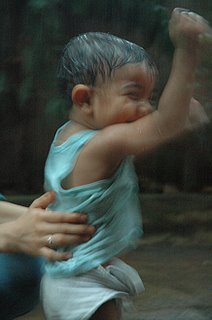 
One tends to get all choked up about the rains especially when one is stuck in the desert. You can never complain about the heat without some killjoy clucking, “Oh, just you wait, it gets worse in July and August.”

I find it hard to imagine going through only two seasons in a year. On the other hand, colleagues find it hard to imagine why I carry a shawl. That’s the only way I can get through a day in the icebox, I tell them. People are so determined to obliterate every memory of summer, that air-conditioners are cranked up to max – in offices, homes, cars, corridors. I’m one of those who need two blankets to weather the ‘Bombay winters’. So, one can understand my abhorrence for super-efficient air-conditioners.

Out of the icebox, into the sauna – that’s the feeling of getting out into the open. Dry heat is a myth out here. It’s humid and cruel, especially to one’s lungs. No matter how deeply I inhale, the lungs never fill up. And I end up in a gasping heap in the car, croaking for the a/c to be turned up. Just so I can breathe.

I’ve always scoffed at those who follow the weather bulletin like the cricket score. But I dutifully note the temperature with awe each day. It was 49 degrees yesterday.

“Oh just you wait, it gets worse in July and August.”

Look on the bright side, they say. I shield my eyes and squint; yes, summer has some redeeming features, after all. The most welcome one being the easing up of traffic. Most people are shocked when I tell them Dubai has a massive traffic problem. A 25 minute ride takes 1 hour and 10 minutes, and that’s only if there are no accidents en route. With most people away on vacation, it only takes 45 minutes these days.

And then there’s this ditty on the radio station City 101.6, which puts me in a ridiculously good mood every single time I hear it. It goes something like this:

A chorus of female Brit voices starts off with a shooby-doo-bop 50s style melody:

The heat is getting to me, I think.

An issue that’s been raging just as fiercely as the summer sun is the latest Ministry of Labour ban on field work between 12:30 p.m. and 4:30 p.m. during July and August. According to one report, 700 workers had been hospitalized last year on account of heat stroke. And those were only the reported cases. So it’s a little surprising that none of the higher ups thought of this ban until a fortnight ago. In any case, it would seem like a welcome move for thousands of labourers who toil in the blistering sun (while some others whine about the heat and a/c’s.)

Except that it’s not. Construction groups are bitter about the fact that projects will get delayed and costs will rise. Some companies have willingly offered to pay the fines up to Dhs 600,000 rather than giving workers the four-hour break.

The Labour Inspections Department itself has been caught on the backfoot. There’s an acute shortage of inspectors to ensure the implementation of the ban.

The labour ministry source said: "Dubai has three inspectors and one unit head. We can't do 10 per cent of what's required."

Interestingly, most labourers are blissfully unaware about the new law that’s purported to be for their benefit.

"Our foreman didn't tell us. I am not sure if the foreman knows," said Nur Al Ameen, a labourer.

Perhaps, the most poignant quote of all, was this one:

Said one worker, Lalji Roy. “It’s a real struggle to work in the sun, but we do it for the money. As long as it won’t affect our finances, this is one of the best things that could have happened.”

Contrast it with the views of some of Dubai residents.

"No way. I do not think it is a very good idea for workers to work after sunset. Just imagine you coming home after a hard day's work and not being able to rest because of the noise made by work at a nearby construction site," said Tim Hunt a British resident of Dubai.

"I come home for lunch and try to catch a nap, but with all that hammering and noise it is impossible," said Khalid Yousuf Sharif, a Pakistani sales executive.

When will these cold hearts melt, I wonder.

Meanwhile, here’s an issue to take my mind off the heat. And the a/c’s. Stay tuned for more information. This is the city on heat.
Signed, Leela A at 12:04 am