Spare a prayer for Preeti

The blog break didn’t turn out as expected. But then, neither has life in the last two weeks. I’m driven to write here on account of the extraordinary circumstances in my life.

I’m back in Bombay. I’ve been here for exactly two weeks. When I boarded the flight from Dubai on April 1, I hoped against hope that the call from home had been an April Fool’s joke. How could my beloved sister, Preeti, be in the ICU? How could a simple case of Rheumatoid Arthritis result in the doctors pronouncing her as being at death’s door? For god’s sake, she’s just 32. Her little girl, my ‘best friend’, Alison, is not even five years old.

I had to bow and scrape with the medics to be allowed to see her on the 1st evening. “I will only look at her for 30 seconds,” I beseeched. I stood by her bed in shock, totally unprepared for what I was to see. She was gasping for breath; her eyes were turned upwards, half-closed, revealing cloudy white eyeballs. Even as I stood there, her eyes flew open and focussed on me. Her wide, beautiful eyes were unnaturally large and there was that characteristic, pearly smile, which even the tubes sticking out of her face did little to diminish.

I told her I had.

“For how long?” she inquired. The tube in her throat made it difficult to talk.

“My boss said I could take a holiday for as long as I wanted,” I lied.

I told her that she must be strong and fight. She beamed and nodded.

“Don’t make her talk”, scolded the nurses, and I was just so thankful to them. I could not stand there for a moment longer without openly sobbing.

I was the last person she spoke to. Preeti was put on the ventilator that night. She slipped into a coma the next morning, and continues to be in a coma until this moment, almost 15 days later. 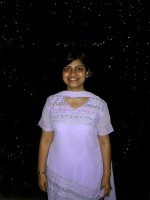 Preeti has had Rheumatoid Arthritis for the last 6 years. How a 26 year old could contract a sickness typically associated with old-age is another fateful story. She was walking on the road near our home when a monkey – part of a street entertainer’s troupe – bit her. She took the three prescribed anti-rabies injections. Exactly a day after the last injection she developed debilitating pains in her joints. The doctors diagnosed it as Rheumatoid Arthritis.

In the last six years, not a single remedy, therapy or exercise has been spared, not a single prayer remained unsaid. But never did Preeti ever complain or be less than cheery. Her joint stiffness became apparent in the way she walked, but she never talked about it even with friends. In fact, her replies used to be a standing joke at home.

“Have the pains started again?”….. “Only a little”

With her limited mobility – sitting cross legged on the floor, a gesture we take for granted, is something she hasn’t attempted for many years – she continued to lead as normal a life as possible, going to work, bringing up Alison, even occasionally, and very cautiously, shaking a leg. At the small farewell party before I left for Dubai, it was she who insisted on the dance music.

A warning bell should have sounded when she took sick leave for the first time ever in mid-March. A little knee pain, she said. When one week of sick leave turned into two, and when the steroids prescribed by the family physician didn’t offer any relief, the alarm bells should have woken up the neighbourhood. But sadly, Preeti’s tendency to downplay her illness, along with neglect and mis-diagnosis led to unfortunate delays. In the two weeks that she’d been at home, the inflamed knees had developed an infection, leading to pus, which invaded her blood stream, throwing her kidneys off gear. Advanced septicaemia, they wrote, on admission. Doctors roared at my parents when they discovered that her blood pressure was only 40. “What were you’ll doing for so long?” they asked. A question we’re still coming to terms with. 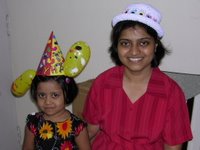 The last two weeks have been plagued by what-ifs. Each morning we steel ourselves to hear the worst.

“Her kidneys have failed”

“Now her blood sugar has shot up”

On Monday, 11 April, Preeti was entirely on life support – dialysis took care of the kidney functions, breathing was with the help of the ventilator and powerful drugs regulated the the blood pressure and heart rate. A decision was to be made. We waited for the doctor to tell us our options.

He came in half hour late. “I’ve disconnected Preeti from the ventilator for the last 15 minutes. She’s breathing on her own.”

It was the first sign that Preeti wasn’t ready to give up. Preeti breathed on her own for the first time in 11 days. She was put back on the ventilator an hour later so as not to tire her or to let the oxygen saturation drop. Since that day, she’s been breathing on her own intermittently. Her kidneys which had completely failed produced a small amount of urine yesterday, in what doctors admit is the very early sign of kidney recovery.

But these tiny rays of hope signs are clouded by an unbeatable knowledge – that her brain might never recover. What’s more, most of the doctors on the panel, save the chief doctor and the orthopaedic surgeon, have subtly or unequivocally told us to give up. And here’s where logic and faith, optimism and pragmatism, love and self-interest have locked horns.

Until Monday morning, we were ready to let Preeti pass on. All the signs pointed to the fact that she wanted to. She has suffered enough, we told ourselves. We whispered in her ear that we would take care of her unfinished business.

But her grasp on life has surprised us all. Each day there are tiny signs – her eyes twitch, she sometimes responds to pain stimuli, on occasion when people pray over her, teardrops roll down her eyes.

Straws, scoffs the neurologist. But he also admits that the dilemma is tricky. One the one we could be “killing off the patient”, while on the other hand we could rack up huge bills, face months or even years of uncertainty, medical complications and even with best efforts, a patient with diminished capacities (I absolutely DETEST the word ‘vegetable’. I will never use it to describe a human being, whatever the condition.)

It’s a testing time for all of us who love Preeti. There are no easy answers. Each day brings new challenges and demands fresh thinking. I have followed the Terri Schiavo case intermittently. Living it, I can tell you, is a wholly different experience. As a family, we’ve discussed it extensively. And we’ve decided to take things one step at a time. Where there is life, even the small, negligible sign of it, there is hope, we believe. We have no desire to hold on to her for our sake, but if she is hanging in there, so are we. There are voices which oppose out of interests that are perhaps misguided. But we believe they too are there for a purpose. Each day we discover new reserves of strength, courage to fight disappointment and forbearance to see the larger plan. 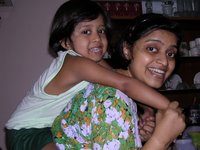 One of the most beautiful and unexpected outcomes of Preeti’s hospitalization has been the reaction of people – family, friends, colleagues, neighbours, acquaintances, even perfect strangers. An announcement was made at our church two weeks ago to pray for her. And the prayers haven’t stopped ever since. Scores of people, some of who barely know us, have offered prayers to their favourite saint or at the holy place they have utmost faith in. Prayer groups across the country, even the world, have been mobilized to intercede for Preeti. Emails have been flying furiously (now I know how the chain mails start) and each day we come across mails from distant family, friends of family, friends of friends of family…

The phone has been ringing off the hook at all times of day and night. The steady stream of visitors has only one refrain on their lips, ‘We’re praying for her’. A woman who came to the hospital last week said to us, ‘Can I please see her? I’ve been praying for her all week. I want to know who she is.’ I was extremely surprised to receive a call from a neighbour of ours who we knew was also very unwell. It turned out she was calling from Hinduja Hospital and was due for a bone-graft surgery the next day. “I’m praying for Preeti,” she said.

Early last week, Preeti required almost 22 units of blood. An email went around Preeti’s workplace, ICICI Bank. Three days later I got a frantic call from the blood bank. “Does Preeti need any more blood? If not, please stop the donors. We’ve got 17 bottles extra and there are five more people waiting to donate. We’re running out of storage space.”

We’ve been truly humbled by the deluge of prayers, hope, optimism and simple, unswerving faith. We, who see Preeti every day, who listen to the doctors, who hear all kinds of ‘expert’ advice, are far more pragmatic. But we also believe that all that positive energy has to produce SOME result. Medical science may have its limitation but the human spirit has none.

So here’s my entreaty to all my friends in blog world, even passers by. If you believe in prayer, please say a prayer for my sister, Preeti. Even if you don’t pray, please send positive thoughts her way. She needs it. We all need it.


(If you have heard of similar cases and have something to share, leave a comment or write to me - dotdotdot@gmail.com)
Signed, Leela A at 1:13 am